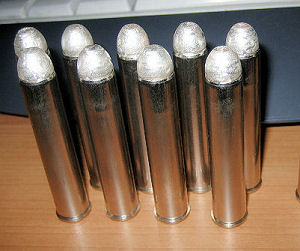 With the silver bullets properly sized, all that remains is to load them like any other bullet. Tom is an old hand at this game, and send me some photos of the process. 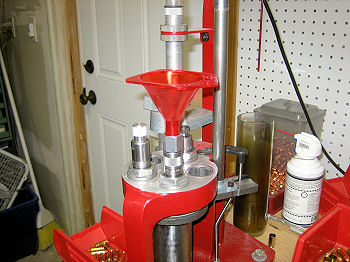 This is a reloading press. Apparently the various buttons and knobs are used to control what happens when you pull the lever. According to Tom, there's a shell in there somewhere that's been sized, trimmed, and primered. This is kind of like playing "Where's Waldo", but I think he hid it somewhere under the funnel. 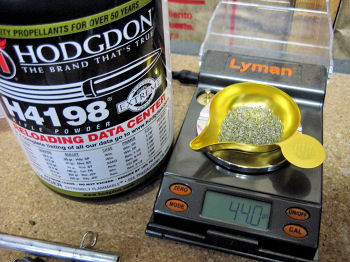 Tom assures me that he actually weighed the powder charge for each shell. He's picked Hodgdon's H4198 powder, and this photo is supposed to prove he's only loading 44 grains in each bullet. That's a fairly soft load for the .444 Marlin, but we're trying to do things as safely was we can — there's no reason to max out the charge. 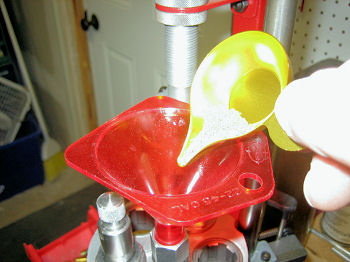 This is Tom pouring the powder into the funnel, which he tells me leads to the shell we're trying to load. 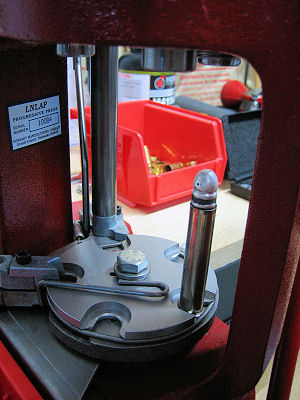 The shell now has a primer and powder, all it needs is a bullet. This shows the bullet sitting on top of the shell, ready to be seated. Notice the groove with no lubricant at the top of the bullet. That's called a crimping groove, and the shell gets crimped tightly around the bullet at this point to hold the bullet in place. 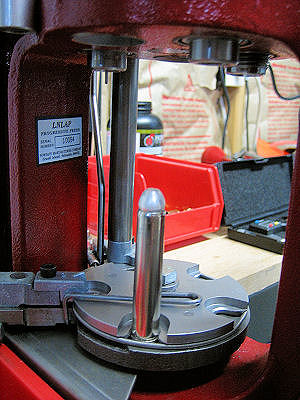 And after a quick pull of the lever, here's the finished cartridge. The bullet is seated and the shell is neatly crimped. That's a silver bullet all ready to take on any rampaging lycanthropes in the area. All it needs is a little silver polish to pretty it up.

At this point I have a handful of silver bullets that I think should be functional. Of course, both Jack Lewis and the Mythbuster's got this far, and with a lot less fooling around. The real question is whether or not these things are actually dangerous to anyone other than the idiot shooting them.

Dr. Jaansalu has the expertise to actually model bullet performance. He's working up the specifications for some powder charges and loads, which we'll send to Tom Lentz along with the next batch of silver bullets for loading. I've just purchased a canister of ballistics gelatin for testing. We're still working out the details, but we'll eventually post some data on how these things actually perform.